A common trope we observed in the movies we watched was the rich or higher class characters often being portrayed as leading unhappy lives. We’ve all seen it, the character whose life everybody envies but the character is not satisfied with. Examples would be characters whose social class leaves them unsatisfied. They see through the ‘fakeness’ surrounding them and long for something more genuine. Or they are conveniently blind to the flaws, usually a lack of genuineness, of their world but grow aware of them when exposed to the inherently ‘good’ and genuine lower class character. Other times, we see characters whose high status acts as a boundary towards their freedom and leaves them with no control over their own lives. They are supposed to do what is expected of them rather than what they choose and this lends itself to the unhappiness of the character. 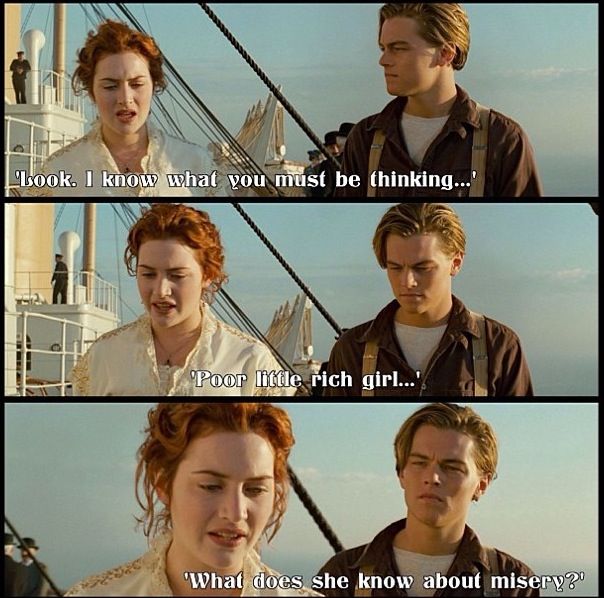 In Titanic, we see Rose being expected to marry Cal, who is cruel and controlling (See clip below). She hates the constraint her life puts on her and it even leads to her attempting to commit suicide.  In the cases of the movie Titanic, this is a testament to the idea that Rose could leave her privileged life behind to run off with Jack and live happily ever after. Despite the fact that we are constantly assured that he has absolutely no money. In Geek Charming, we see the symbolic emptiness of Dylan’s house to represent the lack of affection and warmth in her life. Similarly, we are led to believe that the friends she is surrounded by are insincere. The loss of popularity she would experience as a result of being with the very unpopular Josh is justified in the our eyes because of the unfulfillment and unhappiness the audience initially observed. She would not miss her old life, boyfriend or friends as it is a social order in which she is unhappy. We see further examples in Pretty Woman and Aladdin, and in fact observe this trope in all of our chosen movies.

Clip: Rose being confronted by her fiance

This serves to portray the poorer’s lives as relatively happier. Because we are seeing that the characters are unhappy despite their wealth, it leads us to believe that they do not find money to a priority or a prerequisite to happiness and as a result can be happy with someone from a lower background. The trope serves to erase all doubt that we could have that said character would be able to live with the loss of money or status without missing it.